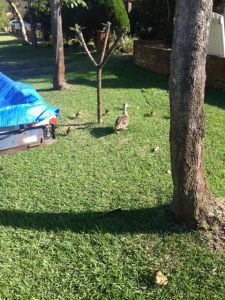 A Mother duck and her ducklings.

It has taken a little longer than expected to get into the Winter mode. The warmer weather seems to have motivated some animals to reproduce – as far as I know I thought ducks only had ducklings during the Spring (so that they could raise their young whilst it was warm and there was more food around). During one of my runs I spotted a Mother duck with quite a few ducklings following her around.

It has been sunny during the day but not very warm. The temperature tends to drop pretty quickly once the sun sets and stays low until it rises again. I haven’t seen much fog though.

We have been having on and off rain – it began after the April floods. It started as a week rain/sprinkle then a week of sun and since then we have been seeing sun more often (with maybe a day or two of rain every few weeks).