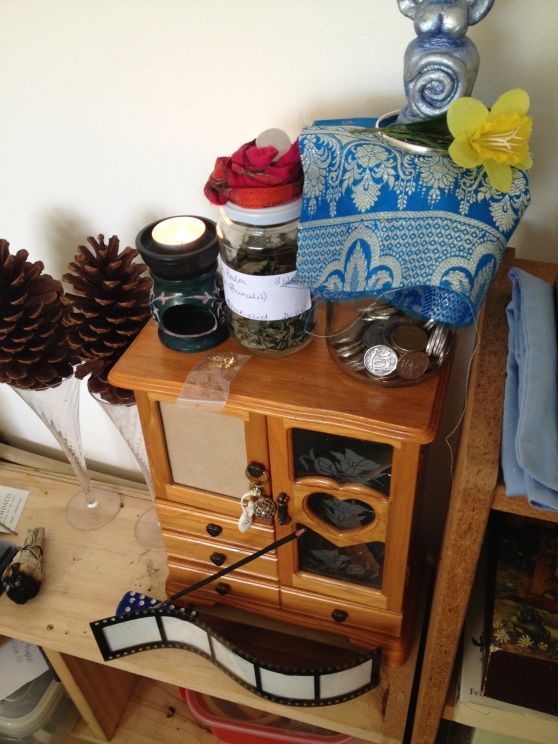 My goal for this is to see the elephant in the room and get women and men talking about the issues of marital rape, casual sexism, spousal abuse, etc which are more common in our society. Other issues such as forced female circumcision, rape and other horrible things experienced more overseas will also be on our minds and tongues.
After creating this event I got quite a positive reaction from those closest to me which then inspired me to create this altar. The jewellery box was given to me by my great grandmother, the incense holder by my mother-in-law, the oil burner is from my mum, the necklace is from my sister and mum (I wear it during my period), the jar is filled with coins and draped with fabric from my mother-in-law, a silver bangle from my nan surrounds the goddess statue I made from clay, the daffodil pin is from my other great grandmother, there are gold earrings worn by my aunty at my parents wedding, a book mark from one of my sister-in-laws and a key ring from my other aunty. Basically I made it as a dedication to the women in my life.

In the couple of days following the ritual I saw more people getting involved – even my grandmothers friends were excited and shared with me their stories. My relationships with women seem to be blossoming into something beautiful. I’ve always felt uncomfortable with other women for reasons I can’t quite pin point and I’m starting to believe that being comfortable with my sex is probably a step in the right direction to true equality.

Last night I had a few dreams – the first one was about my old childhood home. I was there with all these strangers, they were mean and were making me feel really uncomfortable so I tried to gather up all my things to leave. I was driving down the street to escape when I saw Simba (my pet rat) running down a drain. I stopped to pick him up and then half way down the street realised it wasn’t him but another rat – then I couldn’t remember where Simba was.

I drove over to my friend’s place but he told me I was too early (at this stage my fiance was with me – he may have been with me the whole time but I didn’t see him). My friend was drinking on his front porch with another one of my friends.

It was night time and we were driving along a brightly lit road – something happened here but I can’t quite remember. There may have been a warehouse or something.

I then started dreaming about Cockatoo Paul, who’s this guy we met on our road trip – he has a pet cockatoo on his shoulder all the time. We turned up to his place (in a van with a bunch of other people) to do the bush tucker course we were planning on doing with him on our road trip but never ended up going to (we went out drinking instead haha). When I turned up there, Brian was already there and was going to the toilet. Cockatoo Paul greeted me and asked if I was ready and I said that I was – that I was relaxed because I was on holiday and didn’t have to think about anything until I go home (and I really was!).

Then I was at the shopping center where I grew up. I was in the supermarket and I was trying to avoid seeing Jessica (my used-to-be best friend from high school) but when I did run into her it was like I wasn’t there. She was asking the girls at the registers if any of them needed her to work but they all said no. I felt like I should talk to her and make amends but I really didn’t want to speak to her – we went out into the car park and I’m not sure what happened.

Note: The writing of my dreams from now on will be rough as I’ll be writing them as soon as I wake up so that they are accurate.

Yesterday I watched Lupa’s video on Animal Totemism (you can watch it here) and whilst I kind of already knew a lot of the ‘basics’ already through my own practice with animals I found there were still little bits and pieces that I found very useful – it’s now conscious.

When I say that ‘it’s now conscious’ I’m referring to Jung’s concept of the shadow and the ego. I’ve not read this guy’s books but I have read a thing or two about his theories (more through other authors who expand on his ideas). Basically, I work in two ways – my subconcious and my conscious. My animal totems were more of a subconscious or ‘shadow’ part of my practice meaning that I’ve never really used them for any particular purpose, I mostly just felt comforted when I saw them. Sure I have ‘rituals’ dedicated to them but they’re mostly on the I’ll-wear-a-kookaburra-feather-in-my-hair side as opposed to the let’s-meditate-and-talk side. I’m aware that this is probably a really poor way of explaining it because some people would argue that meditation is a subconscious thing – but hey, that’s where I’m at right now and that’s what I’m doing here so for now that’s what I’m going with.

Anyway, Lupa’s video has inspired me to get more in touch with my Totem which is the Kookaburra. I’ve been observing Kookaburra’s since I was quite young and have always felt comforted and safe whenever they were around. I’ve never actually done any meditations to find out that they were my totem – one day in high school they started appearing during times of great stress and anxiety. I hated high school and I felt like they were always there protecting me because they would always turn up when I was making a big decision or thinking about something important.

Today, I started sketching a Kookaburra from a photo I took of one not that long ago – during that time I went into a bit of a meditation. Kookaburra’s have been seen as a symbol for healing and I’ve never really understood that until I was drawing this picture. The thing is, art used to be my life – I remember saying to a friend in high school that “I don’t know what I would do without art” but since graduating I’ve hardly even done a thing. I’ve attempted a few works but never finished. I was lazy with my photography and always thought too much about what it was I was doing. During this sketch I realised that the thing I loved most about art was that I could disappear into it – I meditated and my whole world was consumed with whatever it was I was painting/creating. It’s probably the first time I’ve done that (sober) since I graduated high school and I definitely think I’m on the right track.

I’ll continue to blog about this part of my life – I need to paint, draw and create more.

I live in a place that’s perfect for Kookaburra’s to thrive – I found this fact truly exciting when I first moved in as Kookaburra’s are a part of me. I’ve always seen their seemingly coincidental appearances during important life events as a sign of guidance and protection. That’s why I noticed when one day they seemed to just disappear.

They can be stealthy when they want to be, but I was sure they weren’t around. I couldn’t feel them, I couldn’t hear their unmistakable laughing and I stopped being visited by them which, in itself is unusual. At first I feared that maybe they had left me because they weren’t happy with how I’d been acting (after a tarot card reading I realised that I had a pretty shitty attitude – my cards don’t beat around the bush and they’re not afraid to hurt people’s feelings), then I thought maybe I wasn’t in need of their guidance anymore because two big black crows/ravens showed up in their place (I have an inkling they’re Ravens but ever since childhood everyone I know have called them Crows). I must admit, I was sad and a bit nostalgic – they’d been there for me for as long as I can remember and it just seemed my whole life, including my guardians, were changing.

About a week ago however, I woke up to the beautiful sound of their cackling laughter and I smiled. A day or two later I was visited by a beautiful Kookaburra (I still haven’t figured out if it’s the same one that visits me) with a giant worm hanging out of it’s mouth and again this morning another one visited. After some reflection I realise that maybe there was another reason entirely for their departure – Magpies.

I’m not sure how many of you know about Magpies but let me put it this way – they’re extremely protective of their young. The Kookaburra’s had disappeared around about the time when Magpies were laying their eggs and I had witnessed a few tiffs between the two. It actually kind of surprised me at the time because Kookaburra’s had always seemed fairly intimidating – however, I’m not a bird and I suppose anything with a sharp beak and claws would be intimidating to me. Looking at them now, especially at the one that visited me this morning, I realise they’re more of the class clown of the Australian wildlife. Always laughing and doing whatever they please – you should see a group of them together.

During the absence of the Kookaburra’s, I got closer to the Magpies. My fiance and I were sitting on the back balcony one day, talking and enjoying the view, when a very large Magpie landed on the railing about a meter away from us. If I thought Kookaburra’s were intimidating then Magpie’s were just downright scary – I was in awe though so I just sat there while Brian got scared and went inside. Magpies are reasonably easy to deal with though – I just complimented the shit out of it’s scary looking beak and claws and told it how lustrous it’s plumage was (I wasn’t lying!). Looking back now I realise that maybe this Magpie, which I believe to be a male, was deciding whether or not we were a threat to his soon to be babies. After that experience I left regular offerings for the parents and then their young when they were old enough to fly – this seemed to put me on their good side and they haven’t seemed all that interested in us since (a part from when I try to stick a big black camera in their face).